Dreams of fabulous wealth in unexplored regions of the world have always kindled man’s imagination. After the excitement of the conquest of space comes that of the exploration of the deep, and our collective oceanic dream is indeed driven by the same three forces that led us to leave the Earth: the intoxicating nature of new discoveries, a thirst for ever more scientific knowledge, and the hope of economic gain.

The potential wealth of the world’s oceans can be imagined in two ways: on one hand, the sterile sea, silent and cold, of Homer’s Odyssey—‘Ulysses… gazing out over the barren sea through blinding tears’ (Book V, verse 84)—and on the other, Botticelli’s delightful depiction of The Birth of Venus, in which the sea seems to offer humankind both prosperity and beauty. Our vision of the sea as a whole is therefore sometimes rather paradoxical: we rush and jostle to claim and colonize newly-emerging territories, but are the world’s oceans really tomorrow’s Promised Land?

A Marine ‘El Dorado’: a Substitute or an Addition to our Earthly Paradise?

The financial aspect that is underlined by the adjective ‘economic’ in ‘Exclusive Economic Zone’ (EEZ) is the cardinal notion of our current perception of the world’s oceans. But why was this word preferred above all others? Why do we not speak of ‘Exclusive Strategic Zones’ or of exclusively commercial or military ones? It is logical to expect that the sheer scale of the world’s oceans (360 million square kilometres, i.e. 71% of the Earth’s surface and 1,320 million cubic kilometres of water) implies an immense bounty of available resources, both living and inert. In this regard, the twentieth century was a fundamental step, for it was then that a source of energy first crossed the frontier between land and water: hydrocarbons.

Will the twenty-first century be that of underwater minerals? Nodules, crusts, sulphides and rare earths (1) have become the avowed objective of our conquest of the most accessible stretches of the ocean floor, and a wide range of marine products—salt, seashells, sand, oil and gas, minerals, phosphates—can be added to this list. But yet more resources now offer themselves to us: tides, waves and temperature differences can be used to generate energy; and living organisms too are no strangers to our quest: glues, colouring agents, algae, ambergris, oil, molecules for the pharmaceutical industry were or are still part of the extraordinary catalogue of what the sea has to offer us.
Nowadays, this inventory needs to be revised. Many resources that used to be considered absolutely essential have since been relegated to the rank of accessory or historical curiosity. Salt, for example, a vital resource for the preservation and consumption of many different foodstuffs, has lost much of its value since the invention of refrigeration. The (Tyrian) purple dye that used to be extracted from murex sea snails is now only of archaeological interest. Seashells (mother of pearl, decoration, tools) have been reduced to merely decorative objects since shirt buttons began to be made of plastic, although the pearls of the Persian Gulf or Ceylon continue to be traded.
Deposits of sand and gravel for building are still of interest, but the trade in coral has become strictly regulated. Whalebone or ‘baleen’, indispensable for stiffening umbrellas and corsets (!) until the early twentieth century, is but a distant memory. The price of oil, on the other hand, rose significantly following various conflicts in the Middle East, and this increase justified the acceleration of the search for new offshore and ‘deep offshore’ fields. Yet all this does not mean that scouring the world’s oceans is only of marginal interest nowadays: quite the contrary; but the fact remains that we owe our ability to access these resources to a triple revolution—technological, scientific and legal.

A Triple Revolution. A technological revolution

Until not that long ago, mankind did not venture beyond the thin, topmost layer of our oceans, either swimming freely (2) or in a heavy diving suit, fishing or hunting underwater. Real progress is much more recent: modern divers, thanks to the invention of the aqualung (1943), can reach depths of around 80 metres. Beyond that, and in very difficult conditions, special breathing gases such as ‘trimix’ (a mixture of oxygen, helium and nitrogen) enable divers to reach depths of over 200 metres (and depths of 500 metres have only been reached experimentally thanks to hyperbaric medicine). The use of piloted or autonomous submersibles made it possible to reach a depth of 923 metres in 1934 (Dr William Beebe) and 3,000 in 1948 (Prof. Auguste Piccard), and in 1960 the extreme depth of 10,916 metres (Jacques Piccard and Don Walsh)—a record only recently beaten by James Cameron (10,998 in 2012). Beyond the records that they set, these experiments taught us much about the nature of the seafloor and led to the discovery in 1977 of hydrothermal vents and their unique ecosystems, shattering the belief that photosynthesis was the basis of all life. Nonetheless, a long road lies ahead before the resources of the ocean deep can be harvested: the bitter cold, the impenetrable darkness and above all the extreme pressure are formidable obstacles that first need to be overcome. 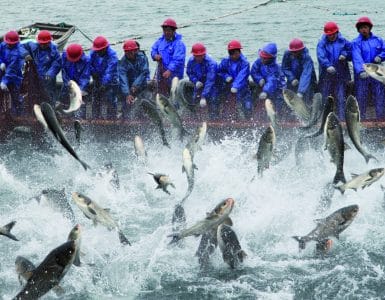 The importance that Asia has acquired in a number of industrial sectors is beyond doubt, but if there is one domain in which the continent is not only the main actor but also the veritable driving force, it is...