The importance that Asia has acquired in a number of industrial sectors is beyond doubt, but if there is one domain in which the continent is not only the main actor but also the veritable driving force, it is commercial fishing and aquaculture.

Asia’s already considerable population, which includes that of the world’s two most populous countries, continues to grow. The continent’s traditions regarding food are in some cases constrained by traditional taboos or religious restrictions that mostly concern meat products, but daily diets continue to evolve towards higher calorific intakes, a sign that many Asian countries are emerging from poverty. The continent, which stretches from Pakistan to Korea, is largely open to quasi-inland seas as in North Asia, or to oceans rich in natural resources as in South and South-East Asia. In addition to this, of course, comes a country that has long been one of Asia’s most populous: Japan, an island whose culture of the sea—and of fishing in particular—is naturally very powerfully anchored.

In every sector, from commercial fishing to aquaculture, both the real figures (1) and the rate of growth are impressive. Around 75% of the world’s fishing boats (around 5 million) are currently Asian, regardless of size, and over 80% of the people working in commercial fishing or agriculture reside in Asia. Of the 18 most active countries in the world in terms of fishing, 10 are Asian. And the figures in the aquaculture sector are even more impressive, since 94% of the people it employs reside in Asia, and indeed the continent has been home to traditional forms of aquaculture long before recent developments and new methods. Asian producers account for half of the 100 million tons of fish caught every year, a figure in proportion with the continent’s share of the world’s population. China is simultaneously the sector’s first producer, first exporter and third importer.

Several elements can help us to refine this picture. Firstly, one must not forget that part of Asia is continental, a fact that considerably counterbalances the correlation between total population and influence over the sector (continental populations accounting for around 10% of Asia’s inhabitants). What is more, compared to an average annual consumption of 20 kilograms of fish per person, the level in Asia is almost twice as great (38kg/person)—a gap which has notably been widened by the progress that newly prosperous countries (such as China, once again) have made.

Most of the countries of the Far East enjoy access to the world’s premier fishing area, the Northwest Pacific (24% of total commercial fishing). This also explains the ‘physiognomy’ of the actors, importers and exporters, but also consumers of fish and seafood around the world.
History, traditions and recent developments can together explain the even more important relative weight of Asian aquaculture. Given the marked preference of Asian cuisines for fresh produce (especially in China and Japan), access to live resources, including at fish markets, where fish are sold alive, is privileged. The consumption of seafood or of aquatic products in general has thus been associated with aquaculture for a very long time. One could say that Asia has been practising aquaculture (with the systematic presence of ponds for breeding fish and ornamental ponds for displaying them, be they destined or not to be eaten) for as long as people in Europe have been brewing ‘craft beer’: the terms are modern, but the practices are ancient. Breeding fish or ensuring that others that have been caught remain alive is thus either a transition between fishing and consumption, or a progressively systematized extension of the food sector. Large groups of companies from the ‘general’ farming industry expanded into aquaculture and became leaders in Asia and beyond. The most famous example of these is without doubt the group known as ‘CP’, formerly ‘Charoen Pokphand’, established at the beginning of the twentieth century in Thailand by two brothers belonging to the Chinese diaspora, and whose business initially involved breeding a variety of animals, including pigs, and producing animal feed. In the mid-twentieth century, CP’s diversification into aquaculture (breeding shrimp—first in Thailand and then in Asian subsidiaries, notably Indonesia) was a powerful driver of growth for the group, whose different activities nowadays account for around 10% of Thailand’s GDP. Likewise, Japan’s sogo soshas (trading companies) also have interests in commercial fishing, in aquaculture, in the trade of fish and seafood (remember that Tokyo is home to the world’s largest fish market, Tsukiji)… The Mitsubishi Group even launched a bid to take over the Norwegian leader of farmed salmon, Cermaq. Growth in this sector is higher than 7% a year in Asia and was particularly strong until 2013, as an important study published in Nature at the time shows. China, India, Vietnam, Indonesia and Bangladesh together account for 80% of the world’s aquaculture. Norway, the globe’s leading producer of salmon, is sixth. 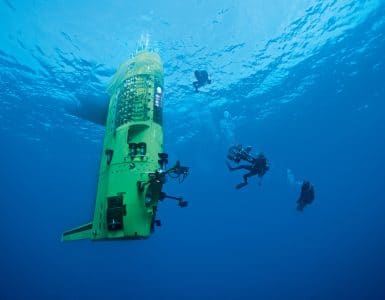 Dreams of fabulous wealth in unexplored regions of the world have always kindled man’s imagination. After the excitement of the conquest of space comes that of the exploration of the deep, and our collective oceanic...